After winning all our games in this year’s league, Team Tagg secured themselves a place in the BSSA High 5 netball league semi finals, for the second year running.
As we strolled down the hill to the David English centre in the spring sunshine, we were reminded of why we are lucky enough to be working in education. Seven excited, enthusiastic and incredibly hard working young people could hardly contain their excitement!
We were drawn against St. Catherine’s and as play began we watched full of pride as the team worked tirelessly to secure a 7-2 victory.
We had made it to the finals …
Full of determination the team leapt into action against Park school. With Olympic style umpiring unfortunately we were unable to continue our winning streak. We do however feel truly victorious in our efforts and enthusiasm as the crowd demonstrated during the awards ceremony.
The team were also overwhelmed by the support we received from parents and colleagues, some on their day off with their mini cheerleaders and some no longer at QPA! Not forgetting our school mascot who also put in an appearance for the event!

Congratulations to our Year 6 netballers who yesterday achieved the feat of becoming the second best team in Bournemouth at the primary league finals.

Although losing to St. Walburga’s Primary in the final, our pupils won their semi-final match against St. James’ Academy and have made huge progress over the last year under the tutorage of Miss Tagg and Mrs Wallis. They showed true grit throughout the competition and represented our school extremely well.

A dreary, damp afternoon did nothing to dampen the spirits of QPA’s High 5 Team Tagg.  This, our second league match against Winton Primary, took place on Wednesday 6th February.  After a brief warm up and tactical team talk, play began.  QPA were spritely from the start, setting a fast pace from the onset, both teams scored in the first quarter. The second quarter was controlled by our excellent play, resulting in two goals from QPA.

Play in the third quarter was dominated by excellent defence from both teams – no goals were score by either team. We were two goals up going into the final quarter, nails were bitten and whistles were tooted.  QPA went on to score a further goal with Winton adding one more to their score sheet too.  The final score was 4-2 to QPA, another sterling performance from Team Tagg – well done one and all!  We are immeasurably proud of your dedication and commitment. The next league game is scheduled for 27th February.

The Year 6 netball teams had a friendly with Kinson Primary this week and performed extremely well to win both matches. Olivia, captain of one of the teams, stated, “It was great that we were all working together and I was pleased to score from a long way out.” Harrison added, “It was great that everyone was playing fairly and that we were evenly matched. It was a tough game!”

QPA’s next Team Tagg adventure was an away game at Bethany school. Mr Petterfer loaded up the minibus as the sun shone and we were off. In an exciting, closely matched game, the super squad demonstrated their phenomenal inter-dependence once more. Half time saw a tight and tense scoreboard, 1-0 to QPA. After a further two quarters, with all manner of high quality passing, defending and leaping, victory was ours. The final score stood at 6-2. Well done Team Tagg! 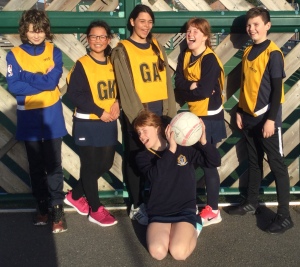 The Year 6 netball team performed really well this afternoon in their match against St Luke’s, winning 8-6. Great teamwork was evident across the court and the players supported each other incredibly well. Go Team Tagg!

Yesterday saw the High Five netball squad A.K.A. ‘Team Tagg’ face their first ever inter-school netball tournament at Bournemouth School for Girls. Over twenty local schools took part in the exciting event on a beautiful, if somewhat chilly, afternoon.

After only a few practice sessions, the committed team of Year Six girls secured their first victory in their opening match! As the afternoon unfolded the team demonstrated their strength of character: grit whilst facing Arctic like temperatures; adaptability when continuously changing pitches and rotating team positions; optimism as they constantly remained positive, even in the face of Olympian like opposition.

The whole squad were a credit to QPA and it was wonderful to watch the quality of their game progress throughout the afternoon. The next match for the team is on Thursday 8th February. If there are any pupils wishing to join the team then please see either Miss Tagg or Mrs Wallis.